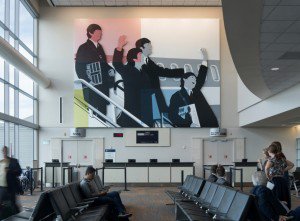 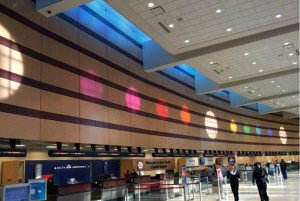 A common tagline for modern airports, and a mindset which has become engrained in 21st century travel, is that the holiday starts the moment one arrives at the airport. And to this mantra, the airports have aligned. No longer do they resemble a herding pen (Vancouver International Airport reflects the diverse scenery of the area), rather a portal embodying the liberal foundations with which travel and globalisation are associated.

Exhibiting Art at the Airports

Besides the clear aesthetic benefits of exhibiting pieces of art, there are also economic reasons why airports do so. Awards can be more than trophies. They can be the difference in winning or losing a new airline contract. If a commercial airline finds some level of affinity with an airport, they will be more likely to strike a partnership. The art thus serves to epitomise the ethos of the airport, and its directors.

Landing in the new Reality

Upon landing in a new destination, the terminal is often the first taste of the foreign culture that you are going to encounter. The arrivals area thus encapsulates a microcosm of the city in which it is found: local foods, drinks and merchandise all being promoted. Therefore, it seems fitting that the location’s most acclaimed painter, sculptor or performer is granted a place on the pedestal as well. Philadelphia International Airport, as a great example, is known for having brought locally infused art into the terminals. The airport is becoming the showcase for national and local prides.

But there’s no denying it – travel can be stressful and frustrating… With stress, comes irritation; with waiting - impatience. A piece of artwork can relax the customers and staff alike (San Francisco International Airport has its own museum!). It can offer a welcomed distraction; drawing focus away from the boarding documents and towards a chef-d'oeuvre. The artwork also enables travels before travel. Escapism before escape. The voyager is permitted a moment of contrast – of serenity – amongst the surrounding rush of modern travel.